By Morgan LewisJanuary 22, 2021Latest News
Breaking News: ECSO S-V-U Investigators Arrest an Escambia County Man on Multiple Child Pornography Charges
Arrested: Jason Paul Cherry, DOB 8-29-75
A nearly three-month long investigation put Jason Cherry behind bars after ECSO Investigators discovered child pornography on his computer and a past relationship with an underaged victim. The investigation began in November of 2020 and involved the assistance of the Florida Department of Law Enforcement, Homeland Security Investigations, and the Federal Bureau of Investigations.
On January 22nd, 2021, a search warrant of a home on the 2300-block of Michigan Avenue discovered Cherry was in possession of digital files that included child sexual abuse material. Other evidence found in the home revealed he was engaging in sexual activity with a female victim, which began when the victim was 14-years-old.
FDLE Special Agent Stephanie Cassidy, and her K9 Maple, located a laptop in the bedroom attic, concealed under insulation. More charges are expected to come after the completion of a forensic examination of the electronic devices.
ECSO’s lead investigator, Jeremy Horn, arrested Jason Cherry on nineteen counts of possession of child sexual abuse material and two counts of unlawful sexual activity with a minor. Jason Cherry was booked into the Escambia County Jail where he was given no bond.
“This is a disturbing and disgusting act that we cannot, and will not tolerate in our community. I’m proud of the investigative work and time that went into this case, subsequently landing this suspect in the Escambia County Jail.” – Sheriff Chip Simmons 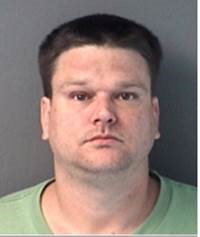