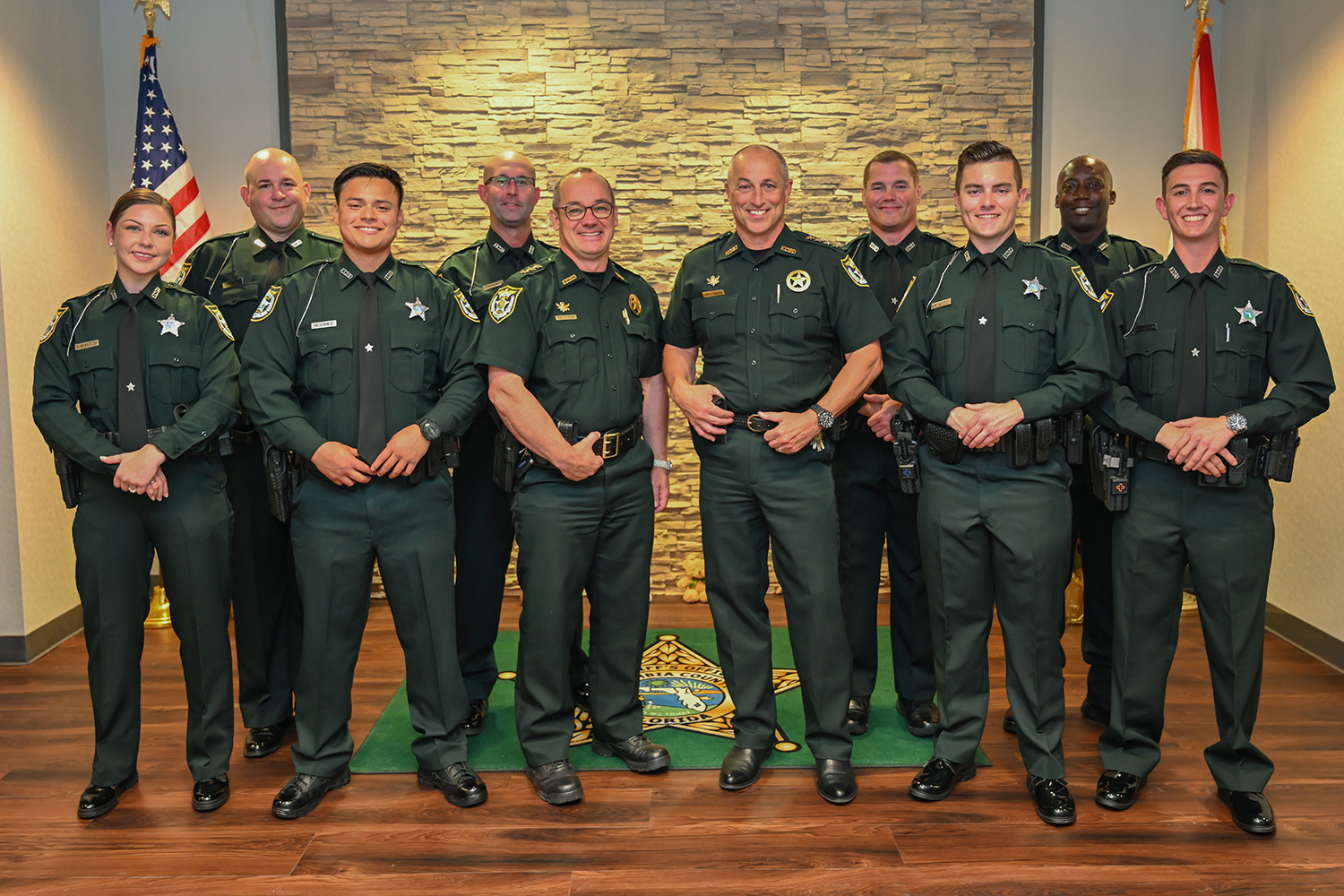 The mission of the Escambia County Sheriff’s Office is to improve the quality of life and protect the property of all individuals in Escambia County by providing responsible, effective and efficient law enforcement services to prevent crime and enforce the law with integrity and fairness. 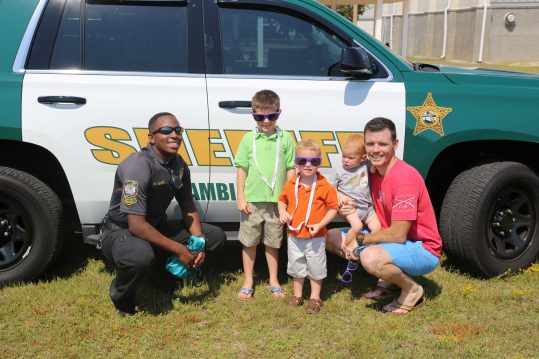 Escambia County Sheriff Chip Simmons has been in the field of law enforcement for more than 30 years.

He previously served as Chief Deputy for the Escambia County Sheriff’s Office, assistant county administrator for Escambia County, and as police chief for the Pensacola Police Department before retiring from the police department in August 2015. He began his law enforcement career in 1984 as a corrections officer for the Escambia County Sheriff’s Office and was hired by the Pensacola Police Department as an officer in 1986. His assignments have included Patrol, Investigations, Narcotics and SWAT.

Sheriff Simmons has received numerous department awards in recognition of his service to the community, including a Bronze Cross and the Gold Medal of Valor, which is the department’s highest award for heroism. He also has been named to the Police and Firefighters Heroes Hall of Fame, the Pine Forest High School Alumni Hall of Fame, and received the Volunteer of the Year and Sports Lifetime Achievement awards from the Emerald Coast Youth Sports Association. In 2013, he received the Mayor’s Leadership Award for the city of Pensacola. 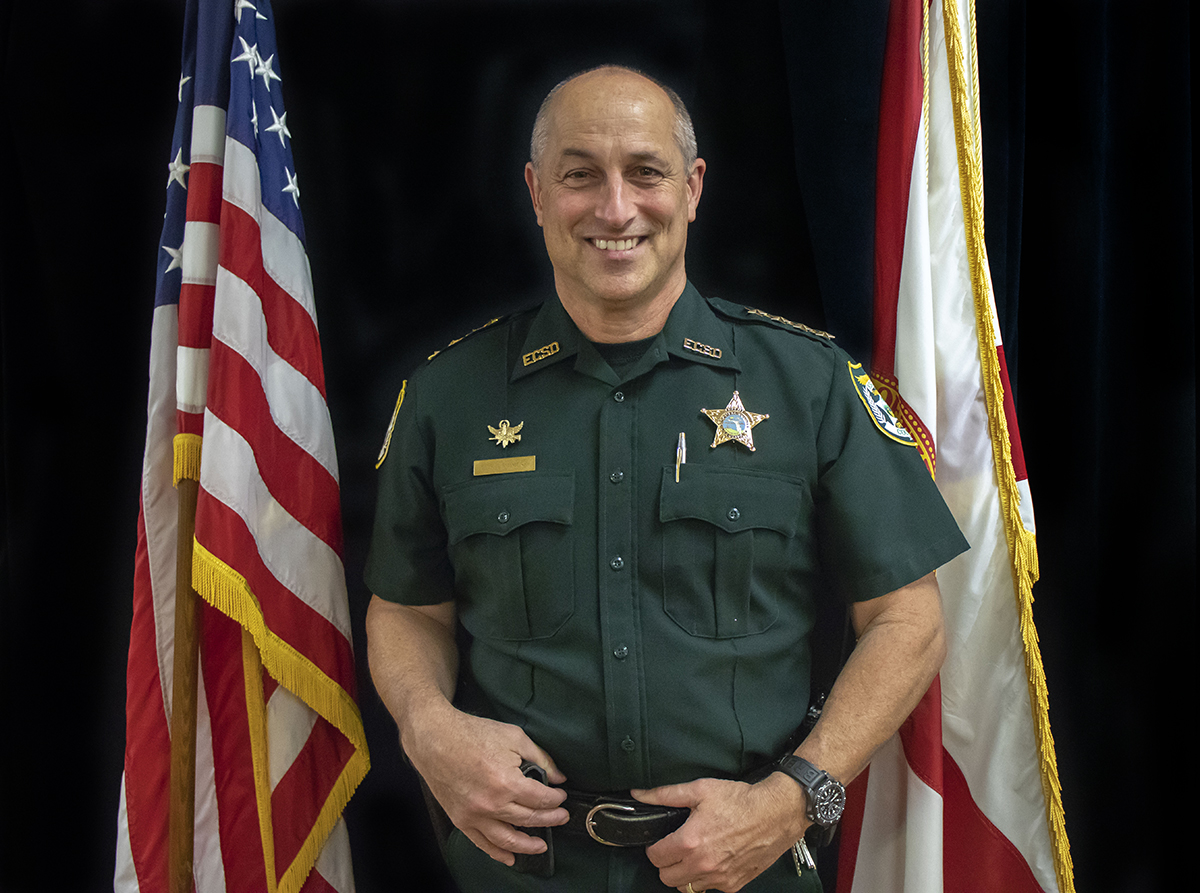 Chief Deputy Tommi Lyter is responsible for the day-to-day operations of the Sheriff’s Office. Chief Deputy Lyter came to the ECSO with more than 30-years of law enforcement experience, a master’s degree in public administration and is a graduate from the FBI Academy. During his time at the Pensacola Police Department he served on the K9 team, SWAT team, Street Crimes and Investigation Units, he was a Field Training Officer (FTO), and a member of the Dive Team. In 2015, Lyter served as the Assistant Police Chief at the Pensacola Police Department. In May of 2017, he was appointed Chief of Police by then Pensacola Mayor Ashton Hayward. Deputy Chief Lyter took over the role of Chief Deputy on January 5th, 2021. 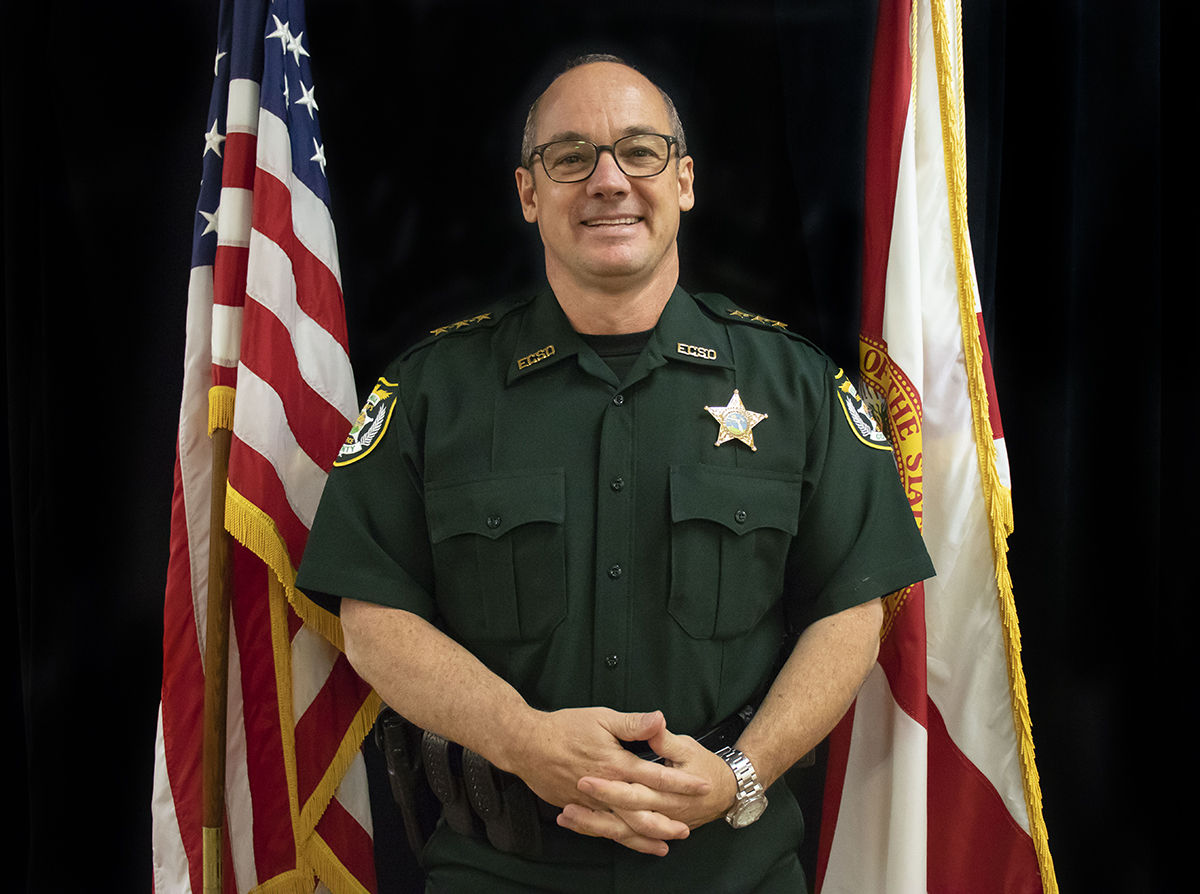 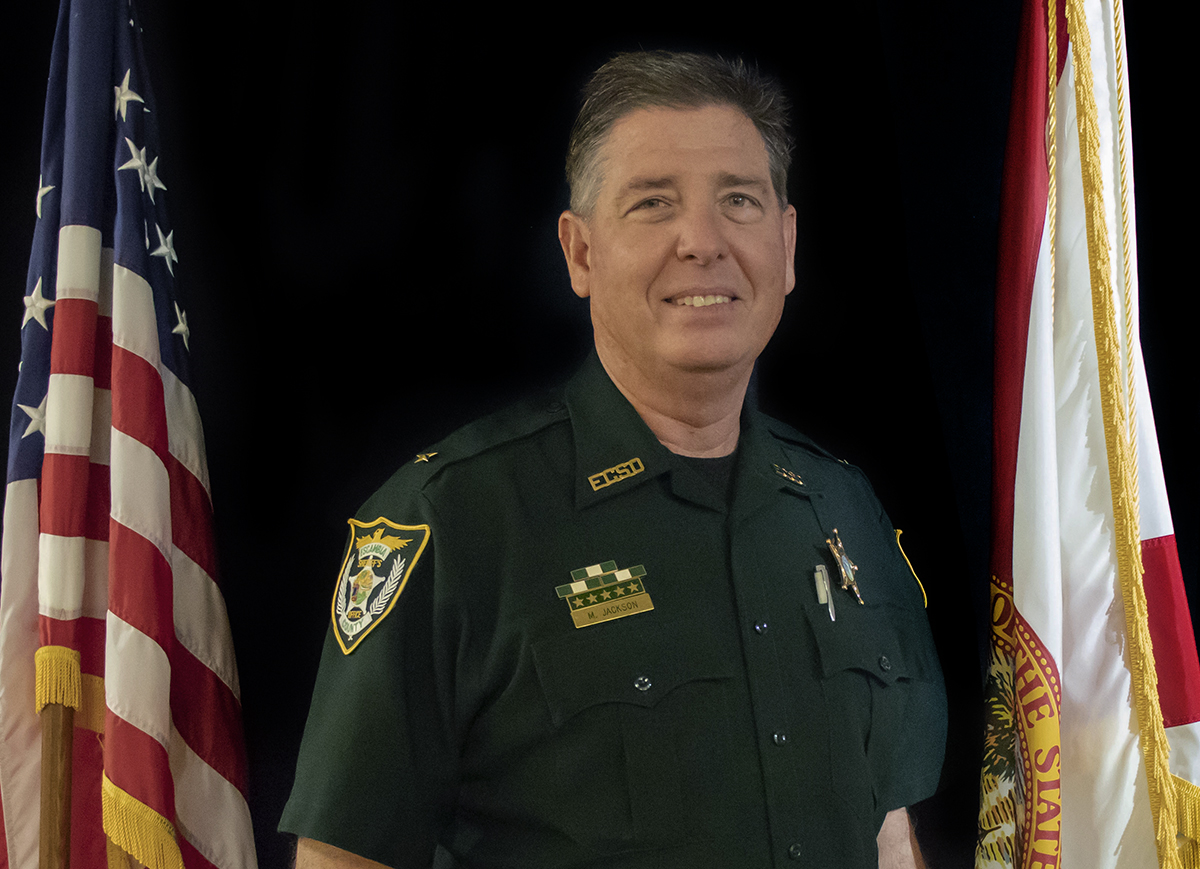 Commander Mark Jackson began his career with the Escambia County Sheriff’s Office in 1994. He has worked in various assignments including Patrol, Narcotics, and Investigations. Commander Jackson has extensive supervisory experience as a Sergeant and Lieutenant in Patrol, Investigations, and Narcotics. He was selected for the Special Weapons and Tactics (SWAT) team in 1997 and was appointed the SWAT team commander in 2005. He is a FBI-LEEDA Leadership Trilogy Recipient and graduate of the 2017 Florida Sheriffs Association Commanders Academy. Currently, Commander Jackson serves over the Escambia County Sheriff’s Office Investigations Unit. 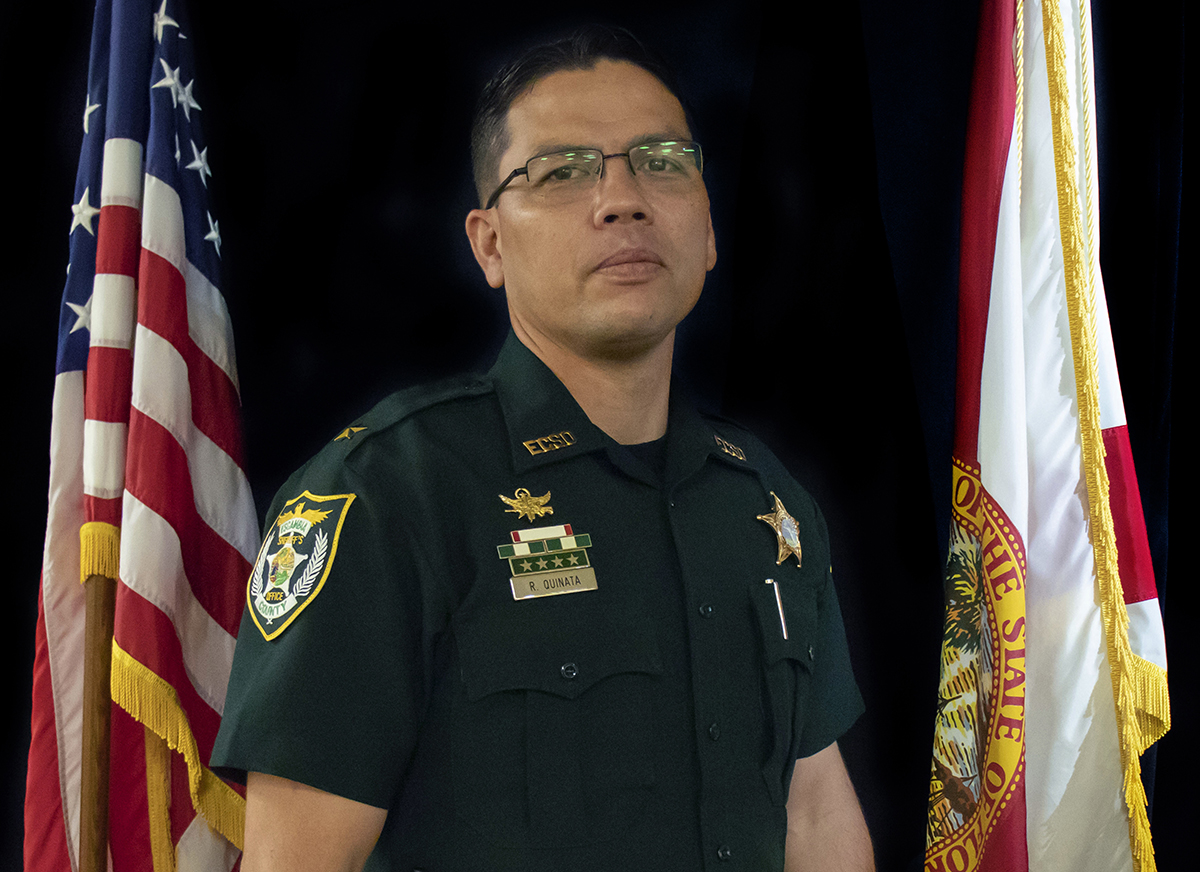 Commander Robert Quinata has been employed with the Escambia County Sheriff’s Office since 1998. Although Commander Quinata spent the majority of his career assigned to the Narcotics Unit as both an investigator and supervisor, his other assignments include Patrol, Major Crimes, and SWAT.  Commander Quinata has attended numerous command and leadership courses to include the Florida Leadership Academy (Class 27) and he is a recipient of the FBI-LEEDA Trilogy Award. Commander Quinata currently serves over Escambia County Sheriff’s Office Uniformed Services and is also the agency’s SWAT Team Commander. 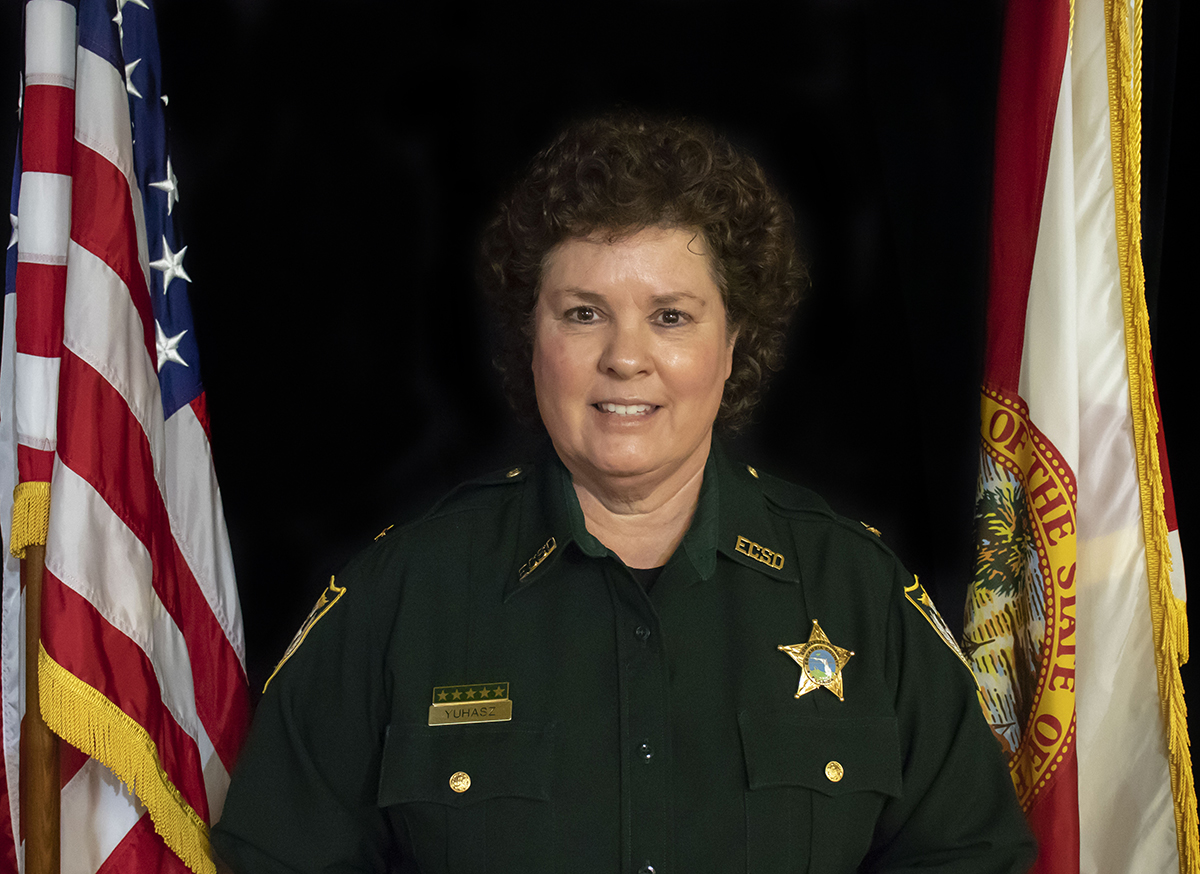 Commander Tracy Yuhasz is a Pensacola native.  She is an alumni of Tate High School and Pensacola Junior College.  Commander Yuhasz has a Bachelor of Science in Education from the University of West Florida.  She has served the citizens of Escambia County for more than 30 years.  Throughout the span of her career, she has worked in many different areas including Patrol, DUI, School Resource, Precinct Investigator, Criminal Investigations, Internal Affairs, Centralized Services Division, Forfeitures, and Administration Division. 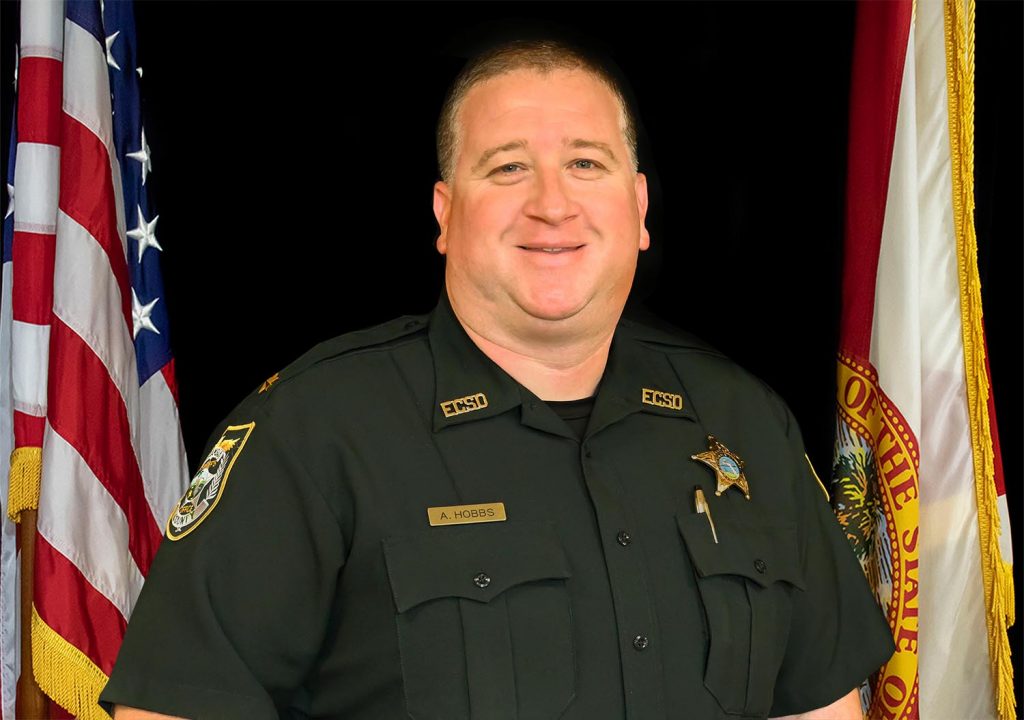 Commander Andrew Hobbs is a career law enforcement officer with the Escambia County Sheriff’s Office. He is currently assigned as the Commander of the Community Relations division, including Public Information, Professional Standards, Traffic, Crime Stoppers, Community Policing, Fleet Services and Domestic Security. He began his career in 2003 and has held many different assignments within the agency. He has been the agency representative for Domestic Security, hurricane preparedness, and large event coordinator throughout his career. Commander Andrew Hobbs has a Bachelor of Science in Criminal Justice Administration. He is a graduate of the National Command and Staff College and Florida Department of Law Enforcement Leadership Academy Class 21. Additionally, Commander Andrew Hobbs was selected as an In Weekly “Rising Star” in 2015 and is a member of Leadership Pensacola Class of 2018. Commander Hobbs serves on the Board of Directors for Manna Food Pantries, Big Brothers Big Sisters, Mr. Robbins’ Neighborhood, and Escambia County Sheriff Foundation nonprofit organizations. 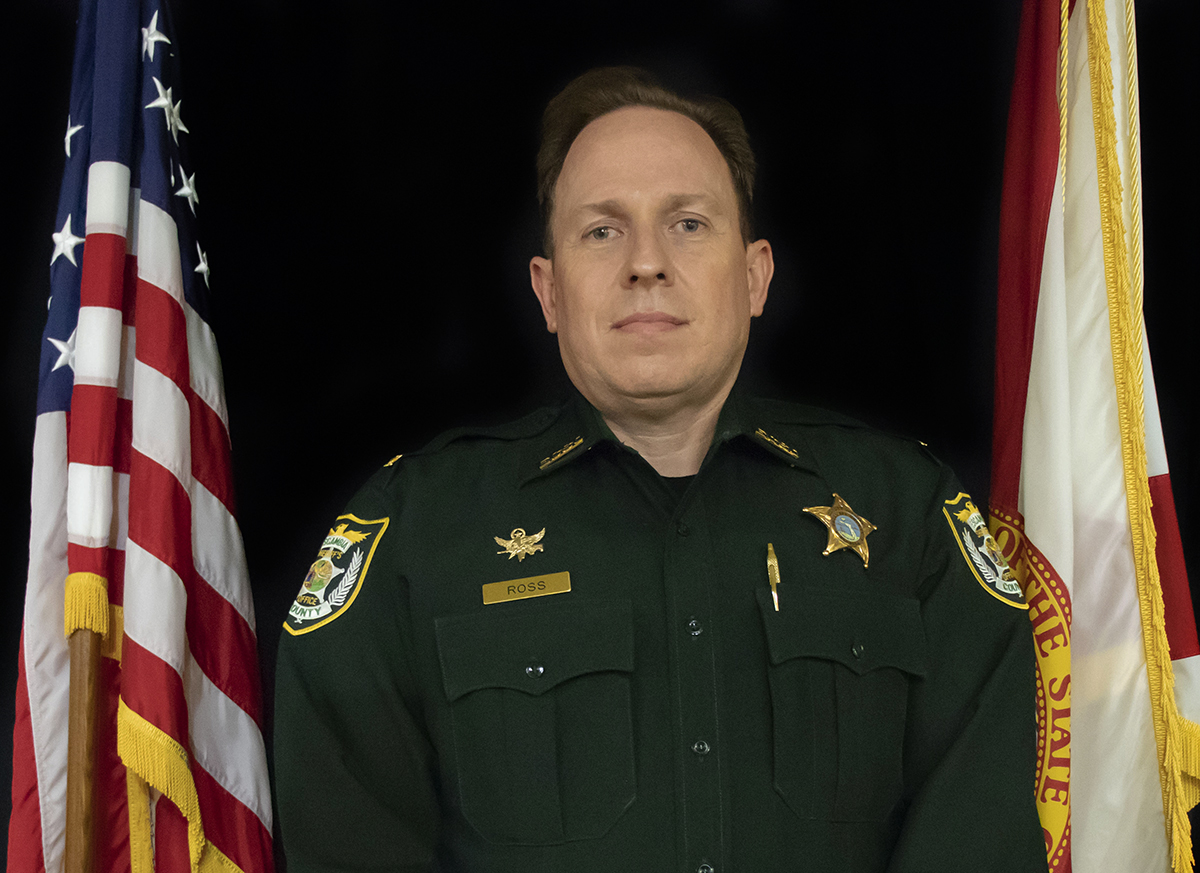 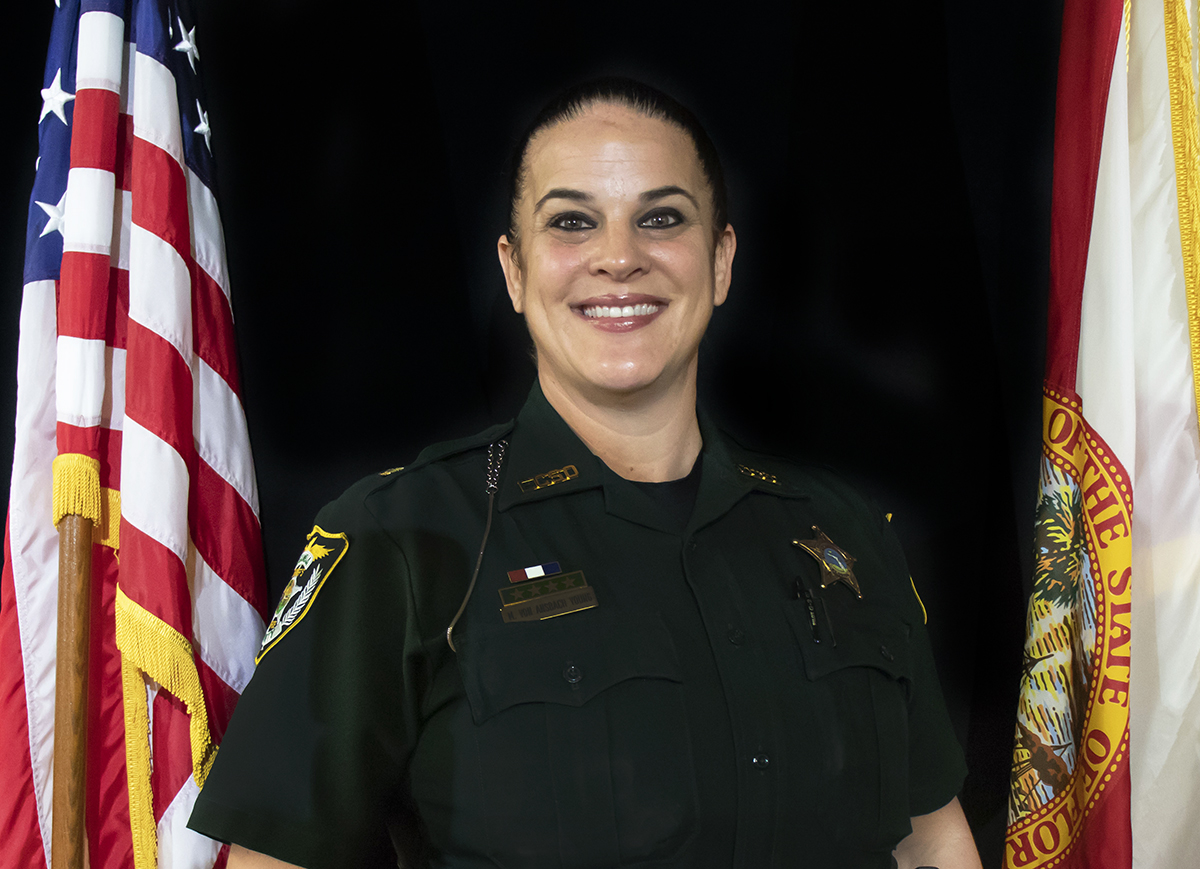 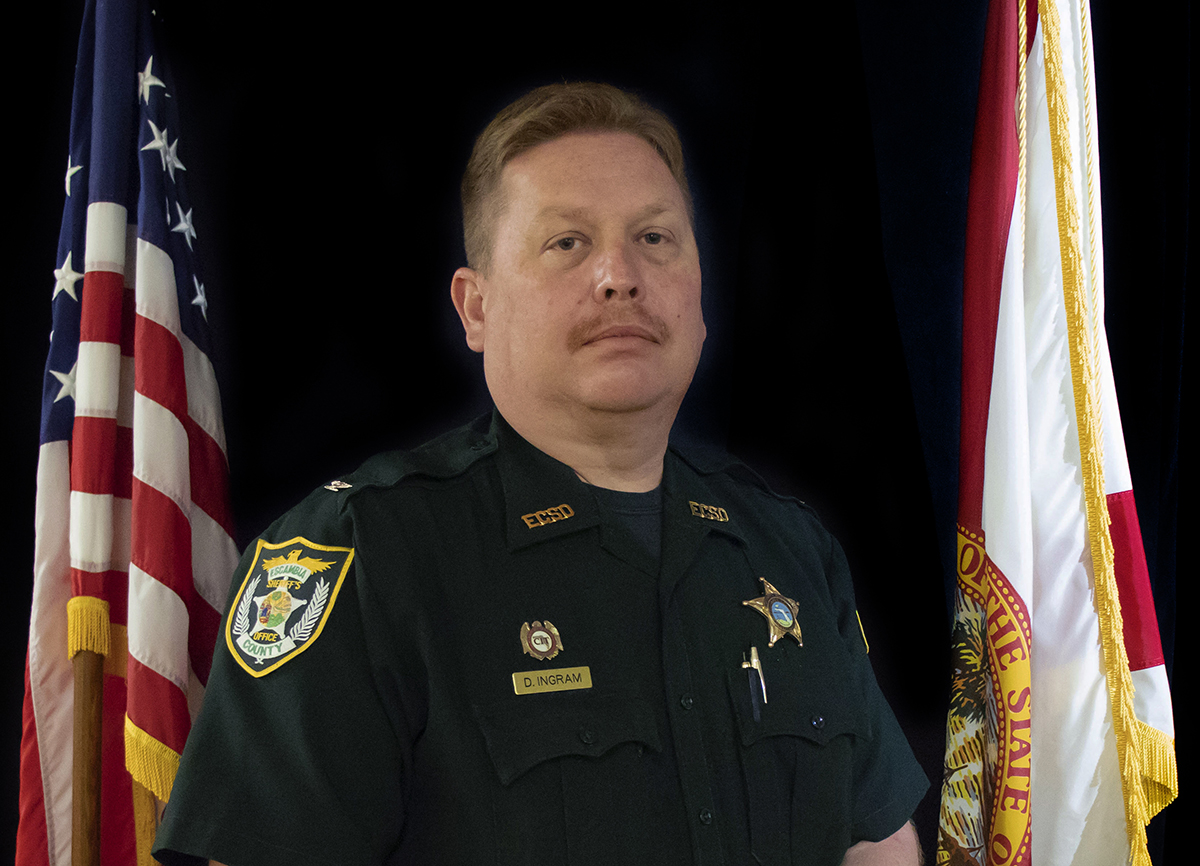 Colonel David Ingram is a law enforcement veteran with over 17 years of service. He is currently assigned to and in charge of the Escambia County Sheriff’s Office Forensic Services, Intel, Missing Persons, and Cold Case Units. Colonel Ingram holds a Bachelor of Science in Criminal Justice from Columbia Southern University and an Associates Degree in Criminal Justice from Davidson County Community College, NC. Colonel Ingram started his law enforcement career while enlisted in the United States Navy. He served in uniform patrol for two previous agencies prior to joining the Escambia County Sheriff’s Office. He has served as a patrol deputy for uniform services, an investigator in Economic Crimes Unit, Escambia County Emergency Operation Center Liaison and Lead, Uniform Patrol Sergeant, and a sergeant assigned to Investigations over the Evidence Unit. He has over nine years of service serving on the Hazardous Materials Law Enforcement Response Team (Rapid Response Team). Since September 2016, he has been a member of the Property and Evidence Association of Florida (P.E.A.F.) and is P.E.A.F. certified.  He has completed his Firearm Specialist Certification, FBI LEEDA Supervisor and Executive courses, and is a graduate of the Florida Leadership Academy.  In 2019, Colonel Ingram attended and completed the National Command and Staff College (NCSC), session 004 and received the Magnus Award. In 2020, Colonel Ingram completed a Master of Science in Public Administration with a Concentration in Criminal Justice Administration from Columbia Southern University. 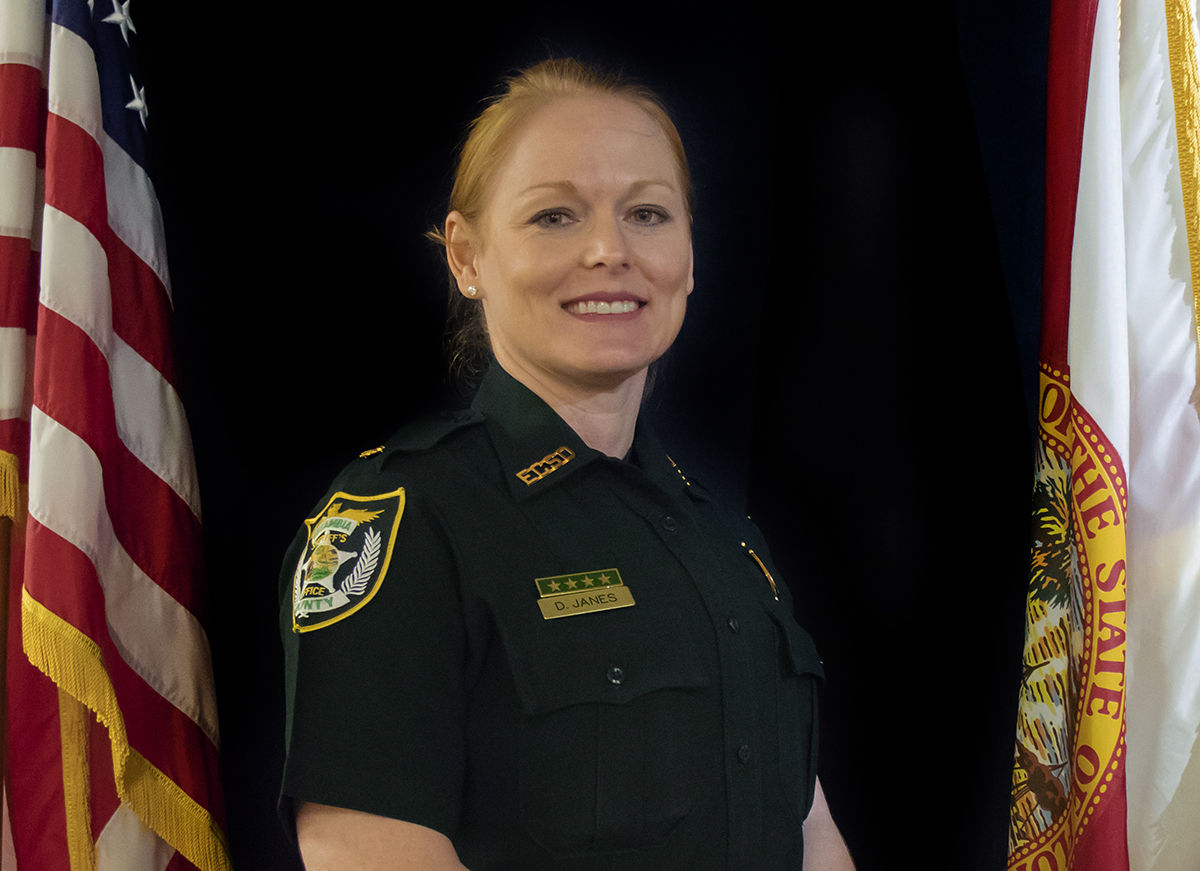 Colonel Dawn Janes began her law enforcement career with the Escambia County Sheriff’s Office in 2000. Colonel Janes served in the Uniform Patrol Division as a patrol deputy for 11 years and was a Field Training Officer during that time. In 2011, she was promoted to the rank of Sergeant and served in Patrol, School Resource Division and the Special Victim’s Unit. Colonel Janes was promoted to Captain in 2018 and Major in 2020. She is a FBI-LEEDA Leadership Trilogy Recipient and graduate of the Florida Sheriffs Association Commanders Academy Class 8. Colonel Janes is currently in charge of the Special Investigations Division, which includes the Special Victims Unit, Intel, Warrants, Computer Crimes, Missing Persons/Cold case, Sexual Predator/Offender unit, Victim Advocates and Criminal Registration. 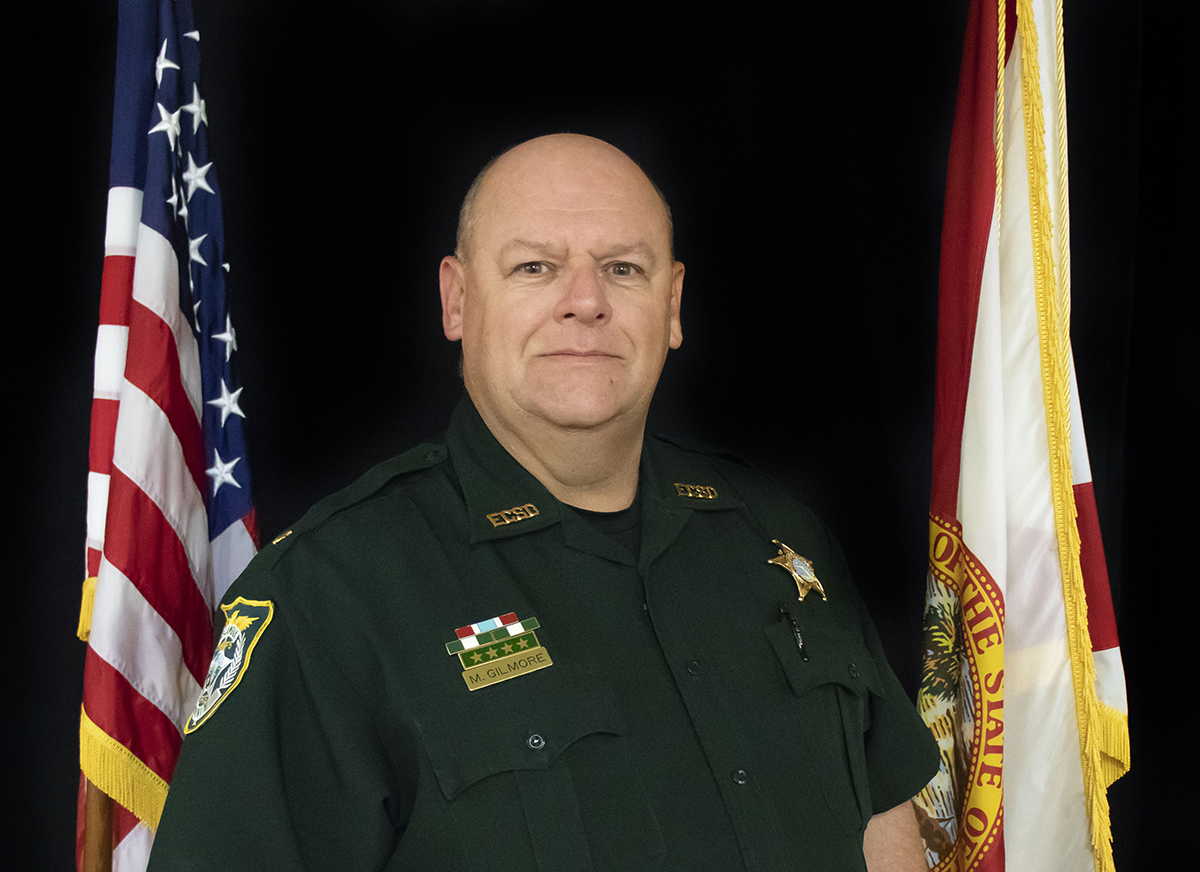 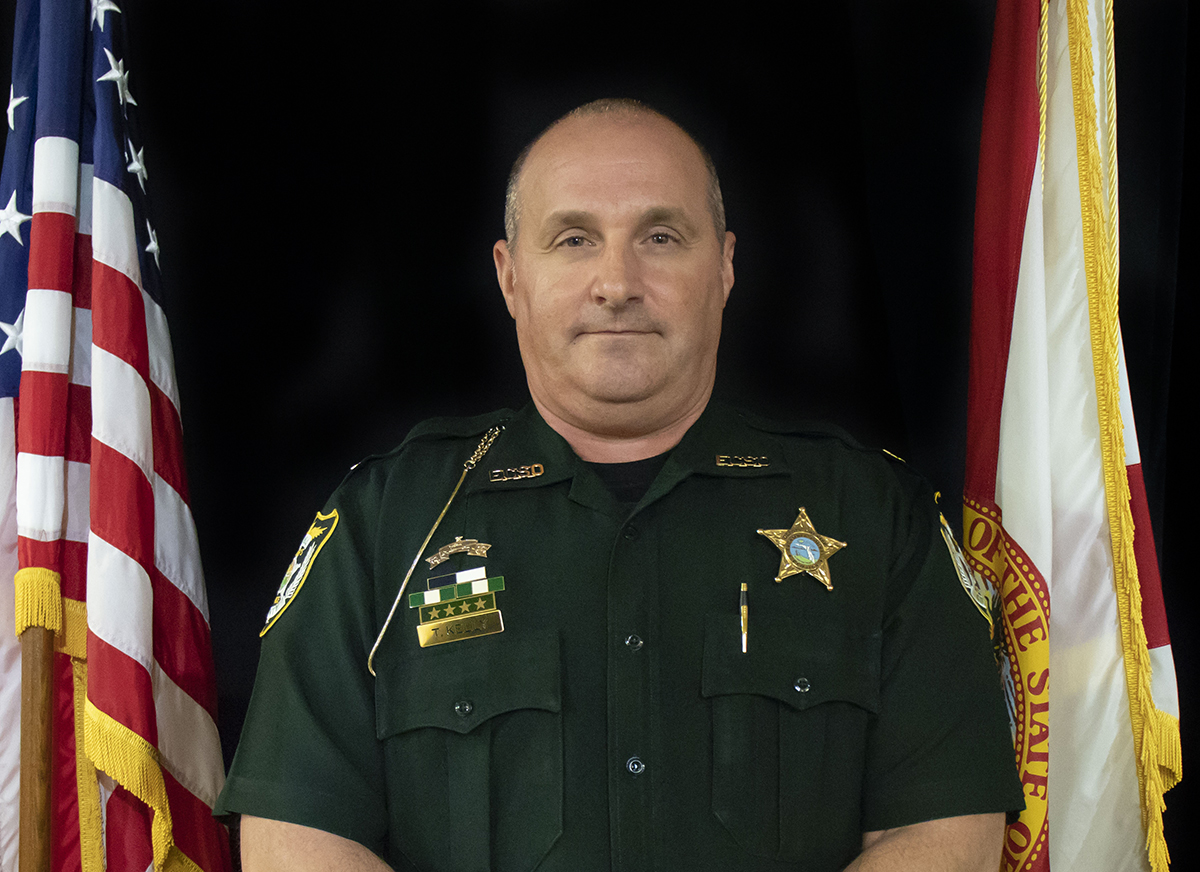 Colonel Thomas Kelly is a former United States Marine and Corrections Officer who began his career with the Escambia County Sheriff’s Office in 1999. He has worked in various assignments to include Patrol, Field Training, Narcotics, Investigations, and SWAT. Colonel Kelly has held supervisory positions in Patrol, Field Training, Narcotics, and Investigations and has attended numerous leadership and management courses. Colonel Kelly is a recipient of the FBI-LEEDA Trilogy Award and is currently serving in the Administration Division. 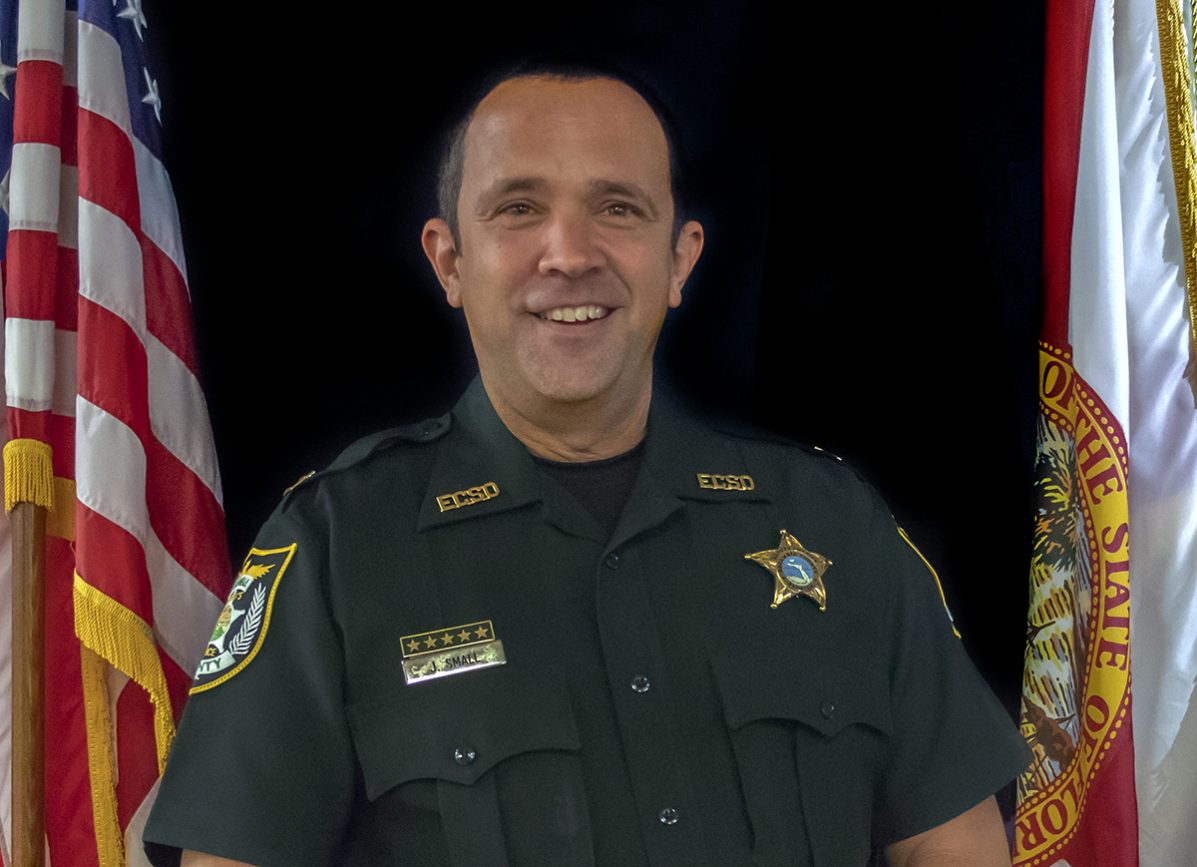 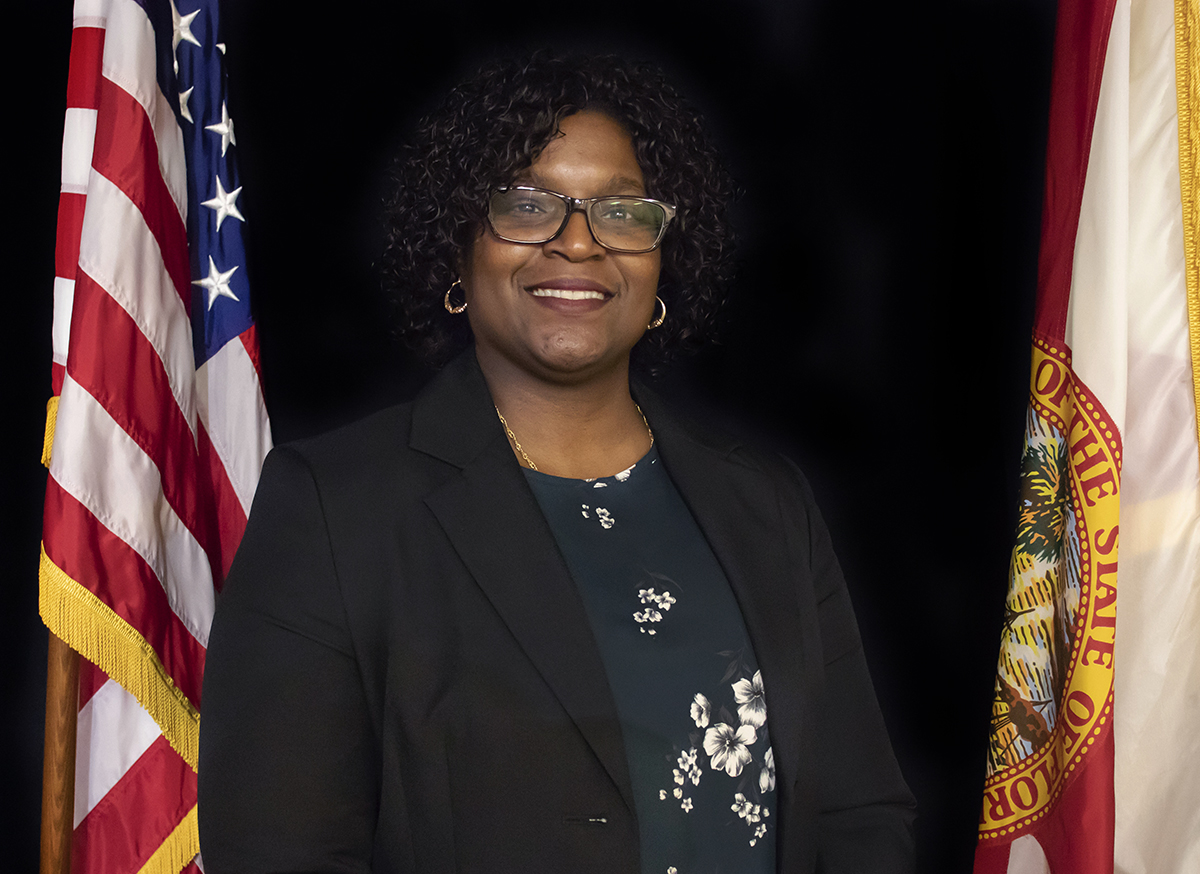 Debra Little served in the U.S. Navy from 1995-2002. She graduated from the University of Maryland with a Bachelor of Science degree in Psychology and earned a Juris Doctor “law” degree from Shepard Board Law Center, Nova Southeastern in 2004.  After graduating law school, she began her legal career locally at the Office of the Public Defender, First Judicial Circuit. Debra was an assistant public defender for one year until leaving for private practice. In 2013, Debra returned to full-time public service as an Assistant General Counsel for the Escambia County Sheriff’s Office. In 2016, Debra was promoted to General Counsel where she currently provides legal advice and counsel to the Sheriff, Sheriff’s Office command staff, and employees in a variety of legal areas, including (but not limited to) the duties, responsibilities, and authority of the Sheriff; criminal law; constitutional law; public records law; and labor and employment law. Debra also conducts forfeiture litigation, reviews and drafts contracts and mutual aid agreements, and provides legal updates on case law and new legislation.

The General Counsel is not a legal advisor for the general public. 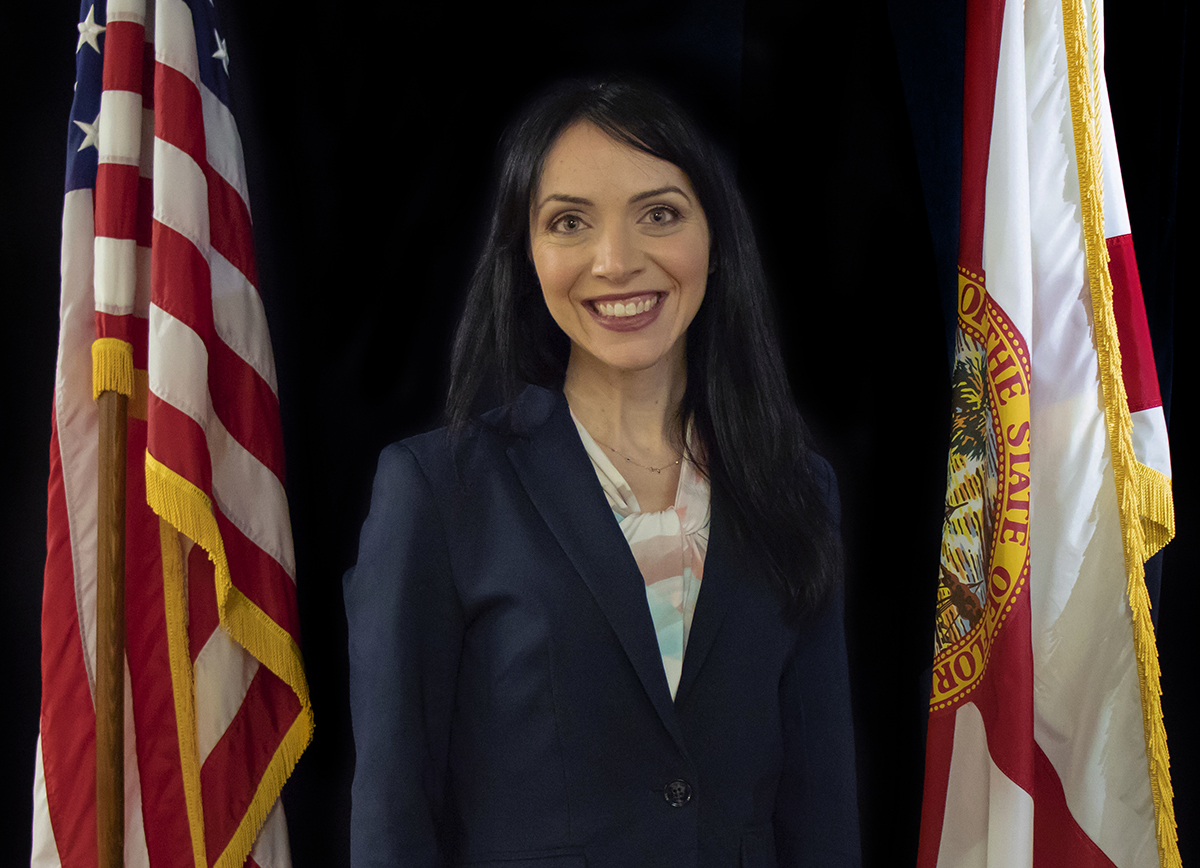 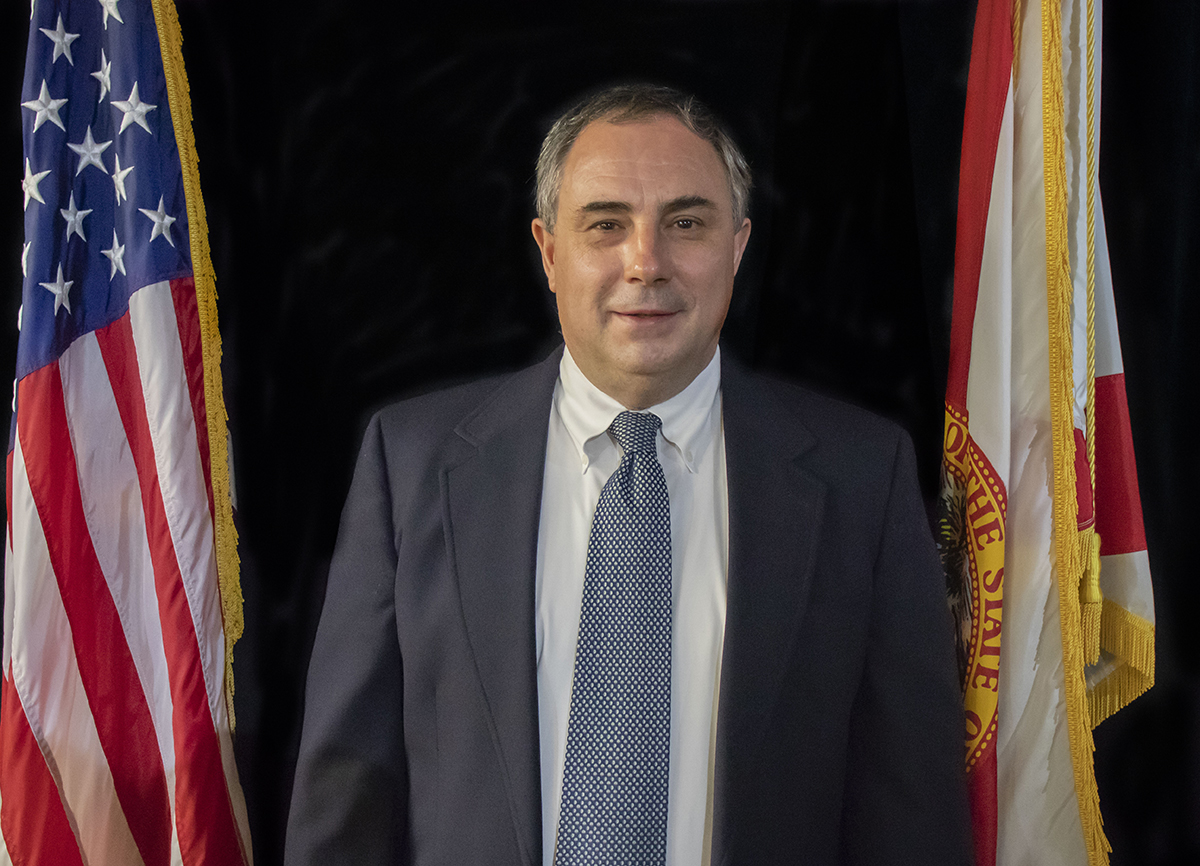 Henrique Dias became the chief financial officer for the Escambia County Sheriff’s Office in 1998.  He has more than 30 years of experience in accounting and finance.  Henrique completed his Bachelor of Science degree in Accounting from New York University. 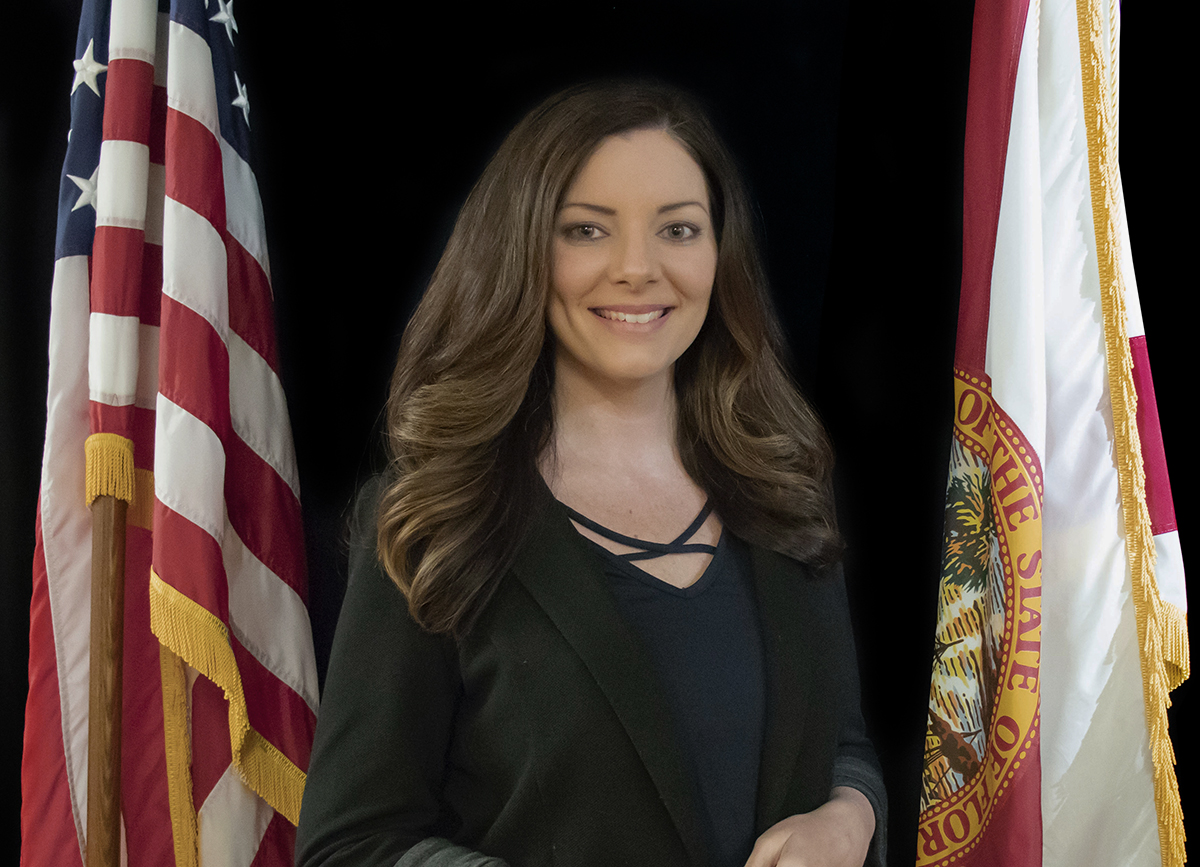 Amber Southard has a Bachelor of Arts degree in Communications/Broadcast Journalism from the University of West Florida.  She began her career working as a reporter at WJHG, the NBC affiliate in Panama City Beach, Florida, where she covered the crime and county government beat. In 2012, she was hired by WEAR-TV in Pensacola and continued a career in crime and investigative reporting. Then in late 2015, she became the Chief Public Information Officer at the Escambia County Sheriff’s Office. You can connect with the Public Information Office by emailing pio@escambiaso.com. 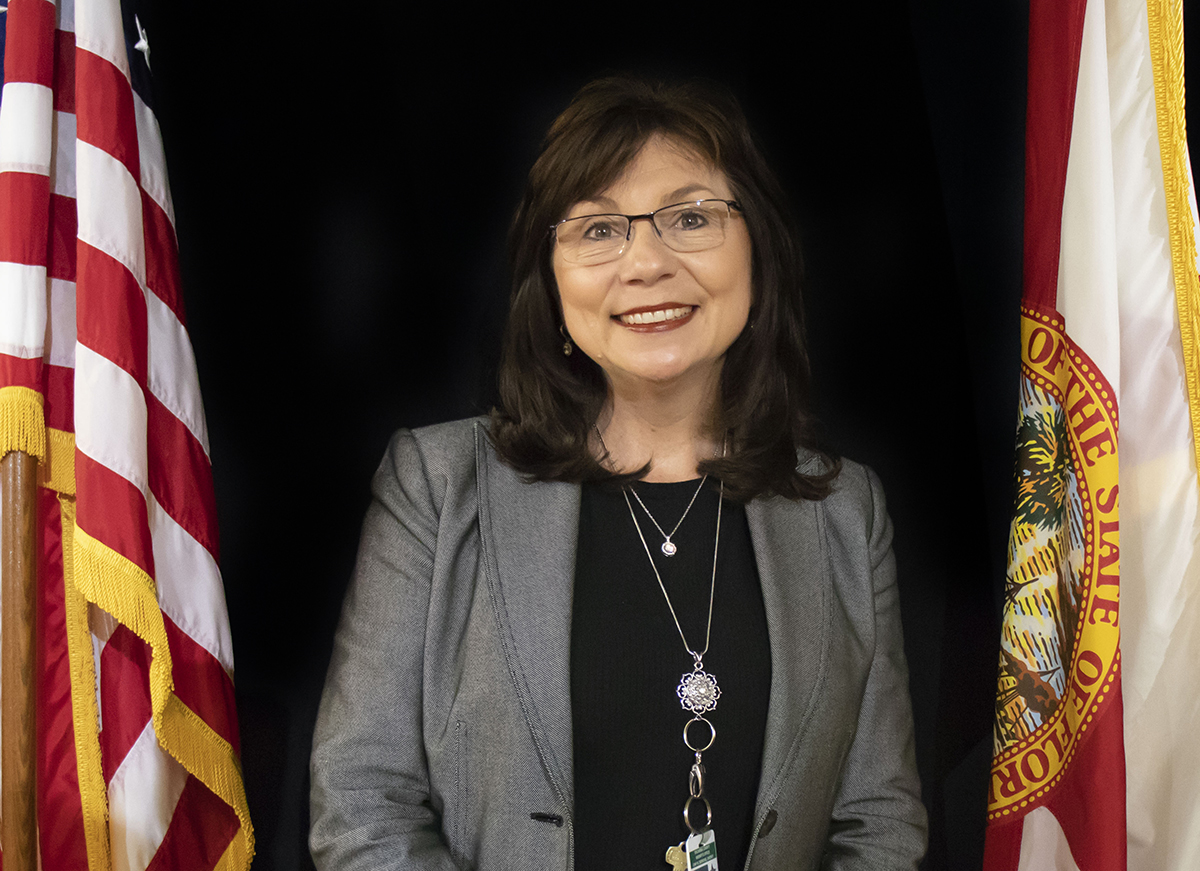 Dawn Brazwell has been the Human Resource Manager with the Escambia County Sheriff’s Office since 2011. She graduated with a Bachelor of Science degree in Business Administration with an emphasis in Management from Troy University. She has over 30 years of experience in Human Resources, Administration and Management. She began her career in the private sector in the automotive supply industry working for several OEM suppliers both locally and nationally. She holds Human Resource certifications of SHRM-CP and PHR and is a recipient of the FBI-LEEDA Trilogy Award. She is a member of the Society for Human Resource Management and also serves as a member of the Board of Directors for Pensacola Habitat for Humanity. 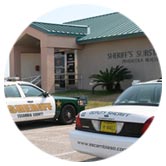 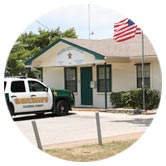 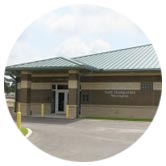 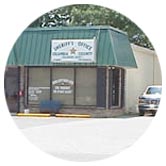 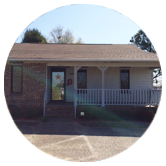 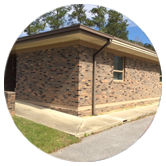